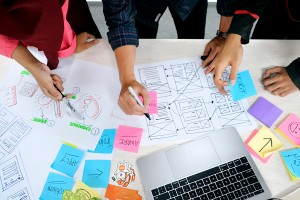 The current restrictions imposed by Covid-19 are still a major challenge for network-based cooperation in the field of migrant and refugee inclusion, and Saxony-Anhalt is no exception here. To foster an ongoing exchange between interested actors, a second ERASMI Inter-Agency Network meeting was held on December 1, 2020 as a video conference hosted by the ERASM project team at Harz University. More than 20 participants from different public administrations, social welfare organisations, ongoing projects and networks addressing migrants and refugees shared their ideas and perspectives in this network meeting designed as an interactive workshop with a clear thematic focus. At this particular session perspectives on network-based cooperation in various settings and conditions were discussed, comparing and contrasting experiences from Saxony-Anhalt with those from other German as well as European regions. To summarize project results for local stakeholders, the Harz University team presented success factors of network-based cooperation as the result of a Europe-wide online survey to collect examples of good and innovative practices. One of the good practice examples chosen, namely the network for integration of the city of Erfurt (Thuringia), was presented by the managing director Rebecca Heintz. She identified success factors and challenges for “her” network and showed participants how Erfurt as capital of the neighbouring state of Thuringia manages to thrive.

Following the two input sessions, participants discussed in three working groups success factors, challenges and tools they use in their own networking environments. In doing so, they confirmed and complemented the ERASMI project’s research findings. In the discussion good personal contacts based on trust and regular communication were highlighted as one of the success factors. Working in networks also contributes to a fair exchange on an equal footing between governmental and non-governmental actors. A heterogeneous composition of networks, which is often perceived as challenging in terms of coordination, was identified as another crucial success factor. An ongoing challenge is to better include migrants and refugees as well as their self-organisations in networks, as these groups have been rather underrepresented in network structures so far. The ERASMI project will continue to provide a (digital) platform for regional actors in the field of migrant and refugee inclusion to exchange experiences on a regular basis. Therefore, a continuation of this format in 2021 is planned.